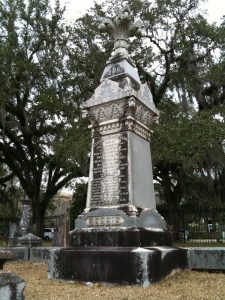 The Old City Cemetery in Tallahassee is home to an unusually extravagant gravestone. The obelisk on the grave of Elizabeth Budd-Graham, also known as Bessie, towers above the rest of the graves in the cemetery. The walled-off stone tower commands attention and attracts onlookers who leave flowers and coins hoping to make a wish. But who was Bessie? And why does she have a massive grave fit for a princess? According to local folklore, Bessie was a witch, hence her gravestone being known as the Witch’s Grave. The exorbitant centerpiece is engraved with her name, birthday, and information about her family. But what leads many to believe she was a witch was the excerpt of one of Edgar Allen Poe’s poems, Lenore, which seemingly makes references to common themes in witchcraft. There’s also the fact that Bessie was only 23 years old when she died, and yet she’s got the biggest grave in the graveyard. Apparently, Bessie bewitched a wealthy man into marrying her, hence the expensive gravestone. Many defend Bessie, saying she was a “white witch,” meaning she cast spells with love and happiness in mind. Others say Bessie wasn’t a witch at all, but a very good Christian woman who was well-loved by her family and friends. Whatever the real story was, her grave attracts hundreds of visitors every year, including fellow “witches” who perform rituals and cast spells at her grave. Some have even seen ghosts at Bessie’s grave at night, most commonly the ghost of a young woman sobbing at her grave.

Bessie is buried at Tallahassee’s Old City Cemetery, the city’s first public graveyard. The people buried at the cemetery are a sample of Tallahassee society in the 19th century. There are politicians, slaves, business owners, war heroes, workers, and victims of yellow fever. Much of the graveyard is segregated. White people were buried on the east side, while Blacks, both enslaved and freedmen, were buried on the west side.

The cemetery was established in 1829 on land previously used for raising livestock. In 1840, the city of Tallahassee took over the cemetery as a yellow fever epidemic struck the city. They began laying out graves en masse to meet the demand for space. After the epidemic passed, many of Tallahassee’s most influential people were buried at the Old City Cemetery. Today, the cemetery is one of the city’s most renowned historic sites.

At the south end of the graveyard, along Martin Luther Jr. Boulevard, lies the Witch’s Grave. The obelisk at the center of Bessie’s grave is about seven feet tall. The grave is bounded by a short stone wall, about a foot tall. Within the wall are a few stone vases.

The obelisk is ornately designed, with detailed engravings, including a cross within a crown. The top of the obelisk is capped with a fleur de lis. On the face of her gravestone is her name, and the names of her father and husband. Her birthday, date of marriage, and day of her passing are detailed on the grave as well. The most interesting part of the grave is the excerpt of the poem Lenore, by Edgar Allen Poe, written below.

Ah! Broken is the golden Bowl:

Floats on the Stygian River;

The funeral song be sung;

An anthem for the queenliest dead

That died so young,-

A dirge for her the doubly dead,

In that she died so young.

The rumors of Bessie’s “witchiness” stem solely from her grave. There are no records from Bessie’s life that indicate she would have been a witch. Then again, witches usually kept their practices a secret. Many of the townsfolk couldn’t believe that someone who died so young would be gifted such an extraordinary tombstone. She was only 23 when she died, so rumors spread that she bewitched a rich man into marrying her. Others point to the fact that she was born in October, the month of Halloween, as evidence for a natural propensity toward witchcraft. Another interesting note about the Witch’s Grave is that it faces west, while the rest of the graves face to the east, in a blatant act of defiance against Christian tradition.

What really drove people to believe Bessie was a witch was the poem from Edgar Allen Poe, which supposedly makes a few references to witchcraft. “Broken is the golden bowl” refers to the witch’s cauldron, which Bessie’s is broken since she passed away. “A saintly soul floats on the Stygian River” refers to the River Styx, which a witch cannot cross in death. If she is a witch, then Bessie’s spirit is doomed to remain in limbo in the afterlife. “The queenliest dead” refers to witches being the “Queens of the Dead.” And finally, “the doubly dead” makes a nod to the fact that witches must be killed twice.

Even though no evidence points to Bessie being a witch in life, the rumors persist nonetheless. They say she could have been a white witch, who casts spells for good. Even so, her grave attracts many fellow witches to this day. They practice rituals, cast spells, and come to Bessie to ask her spirit for help. Some say that a ghost even hangs around Bessie’s grave. The spirit of a young woman has been seen sobbing in front of the gravesite.

Is the Witch’s Grave just a nice tombstone?

Skeptics say that Bessie was simply very deeply loved by her husband and the community, and much of the “evidence” pointing toward Bessie being a witch can be easily explained. First, accusing every woman born in October of being a witch is stereotyping at best. And while most of the graves in the Old City Cemetery face east, Bessie isn’t the only one pointing to the west. It was actually fashionable during the Victorian Era to point the grave to the west. Whereas Christian tradition states that one should point the face of the tombstone toward the rising sun, symbolizing life, Victorian fashion pointed graves toward the setting sun, to emphasize death. Though, this fact could easily be interpreted to mean that witchcraft was a lot more popular in the Victorian Era than previously thought.

As for the ornate gravestone itself, Bessie’s husband was quite rich. Mr. John A Graham was a local lumber magnate, cattleman, and real estate developer. He had the money to splurge on a grave for his beloved wife. The gravestone itself is riddled with Christian imagery. The cross inside the crown expresses their Christian values and is a symbol often used in Freemasonry. Interestingly enough, her husband was, in fact, a Mason.

Skeptics have yet to debunk the true meaning behind the poem. It could just be a poem, after all. Whereas today, music is the most common medium for self-expression, Victorian Era socialites looked to poetry to express themselves.

Like the Freemasons, witches keep their activities a secret. So it’s possible that only real witches know the truth about Bessie. Still, the witchcraft, rituals, and spellcasting around her grave continue, as do the ghost sightings. A visit to the Witch’s Grave reveals coins, seashells, and other mementos left atop her grave ornaments as offerings to Bessie for good luck.

Learn more about the haunted history of Florida!

The Sunshine State isn’t all sunshine and rainbows! Besides the constant rainstorms, ghosts and spirits bring a whole lot of darkness to this tourist paradise. Check out Annie Lytle Elementary School, known to locals as the Devil’s School. This abandoned school was closed down in the 1960s and was rumored to be the home to a cannibalistic principal, a murderous janitor, and a Satanic cult. Now the empty building attracts vagrants and vandals. Grab a beer at the Last Resort in Port Orange, the bar where serial killer Aileen Wournos had her last beer. After killing seven men, Aileen was finally apprehended after ordering her last brew at the Last Resort. The Castillo de San Marcos is Saint Augustine’s biggest attraction. It’s the oldest and largest fort in the US, and it’s also very much haunted. The early days of the San Marcos were plagued with violence and death as the Spaniards and British fought for control of the region. Later on, the fort was used as a prison for Native Americans, where they were held in horrifying conditions, often dying of disease. Today, visitors are haunted by ghostly soldiers and blood-curdling screams. You can also read up on the most haunted places in Florida right here!