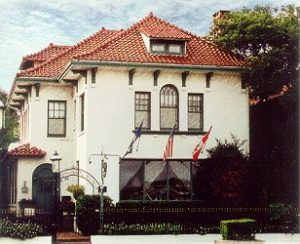 Main street St. Augustine, where you’ll spot all the tourist traps, all the shops, and much of the action is called Avenida Menendez. Menendez is the main drag of the town, it’s hip, it’s artistic and it’s filled with most of the photo-ops tourist come to St.Augustne for.

Menedez curves around the bay-front and surrounds the historic section, it then continues to Castillo San Marcos and the city gates, on that very curve is where you’re likely to get the most striking sunset and the most costly espresso or beer to accompany that sunset, also, on that very curve is on of St. Augustine’s most haunted B&B… Casa De La Paz.

Casa De La Paz used to open as a bed and breakfast but Days Inn and the many budget motels opening all over St. Augustine choked the old elegant and homey inn’s initiative. La Casa De La Paz is now closed, but for more than a century is was a bustling joint just a stone’s throw away from restaurants, art galleries, museums, historical hot-spots, and antique shops. 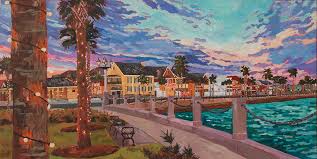 And, the historic building still manages to rustle up some scares due in part to its ghostly atmosphere and the dozens of supernatural stories enshrouding it multilayered history.

The very first owners of the business were the Pullers. In 1915, the couple made it their private home. J. Duncan Puller was a rather famous and prolific banker, a member of the upper crust, and one of St. Augustine’s big shots. He was a heavy hitter during the grandeur of the Flagler era and friends with everyone that matter. During these prosperous times, it was not uncommon to build opulent homes and Puller, went all out with Casa De La Paz. He paid a hefty price but managed to include in hsi little jewel by Matanza Bay arched doorways, grand windows, mirrored fireplaces, red-tiled roofs, hand-carved moldings, and leaded glass bookcases. To say the place was posh would be underselling the property.

Over the years the place started changing hands and business fronts. It passed from a private home into a small boutique Inn, then back to a private home, then as a kindergarten, then the kids were kicked out and a chef set up shop and made it a charming restaurant. When the restaurant didn’t pan out, the chef was given the bum’s rush and after heavy and extensive renovations, in 1986, the Casa began its – I’m going to say 12th life – as a charming bed & breakfast.

And now it’s close so, God only knows what it’ll be next year or when you visit. What’s important, to all those ghouls and ghostly aficionados is what took place in the Casa in 1920 and the reason why dozens of ghost tours brake in front of the spot every single night.

The Specter Of Miss Mabel.

When the originals owners of the Casa, the fancy-pants Pullers, governed the house they invited a close cousin from up north. The young lady in question had just gotten married to a dashing lawyer and the couple was on the lookout for a honeymoon.

“Hey, I have an idea, let’s just invite Mabel over. Tell them her she can stay in the upstairs bedrooms with her hubby and, this is why I’m such a savvy financial cookie, we won’t have to get them a wedding gift!”

For all intents and purposes, the couple was incredibly in love. They were in the throes of romance and having a grand old time in St. Augustine. They were shopping, celebrating, fornicating like bunnies, and spending the day’s soaking up the rays.

On the last day of their visit, the young groom decides to try his luck.

The landlubber vacated the Casa De La Paz, got on his skiff and rowed out into the gulf. Mid-afternoon, out of nowhere and Atlantic Storm slams into St. Augustine. The Florida coast being the magnet seems to attract spur of the moment meteorological acts of Gods. The girl stares out the window and goes bonkers with worry. Once the storm passes, she dashes out onto the surf to find her husband, the Pullers call on some friends as a search party is deployed.

They scour the sea, high and low, and never find him. All they manage to salvage was the capsized skiff.

The girl, heartbroken, locks herself in the upstairs bedroom of the Casa De La Paz. Grief-stricken and hanging unto sanity by sheer will, Miss Mabel barricades herself in the Queen Isabelle room. The only sound in the house is her sob as the girl mourns her recently deceased husband. The days turned into weeks, and the weeks into months and the only noise escaping her alcove were her frantic cries and mournful bellows; a soundtrack that seemed to permeate the place in desolation.

Then, on the anniversary of their marriage, the weeping lamentations came to an abrupt end. The staff, puzzled by the sepulcher silence, broke open her door and discovered the emaciated corpse of Miss Mabel.

But, and here’s the kicker, an autopsy revealed that Miss Mabel had been dead for weeks… A heart attack. So, who was crying up until that very morning?

Her spirit has been seen by many, usually with a suitcase and seldom she has been known to ask guests, “When are we leaving?”

She also has a bad habit of moving the crystal wine decanter top and other items.

On certain stormy nights, people who pass by the house comment on the fact that they can hear the cries of a girl – “as if in pain” coming from inside.