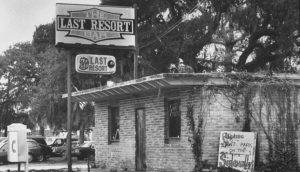 Morbid, ghoulish, macabre, and with a sick sense of humor… if any of those terms seem to apply when crafting an apt description or internet dating profile of who you are, then you’ve stumbled onto the right article. If you also happen to like palm trees, choppers, a cold one at any given hour of the day, and killer women then you just hit the jackpot! In today’s stroll through the bizarre and often illogical byways of campy roadside attractions, we are going into the weird head first. We are giving you the scoop on Port Orange, Florida, a landmark that’s become a most-do item in every dark tourist’s bucket list… the world-famous Last Resort Biker bar. Just an hour’s drive from St. Augustine

The Last Resort, up until 2003, was – and I’m being modest in my praise – a dump. No, let me rephrase that statement. It was the sort of place that other dumps would avert their eyes from and cross the street to avoid. If the CDC ever came to Port Orange and happened to stop at the Last Resort, the whole state would have been carpet-bombed a day later just “to stop the contagion.” That’s the Last Resort… and that same spirit, that same “do I need a tetanus shot?” attitude hasn’t improved with its post-Hollywood shot to fame.

You see, in 2003, the movie Monster was nominated for a truckload of Oscars and actually won a few. The big one it scored was for best actress Charlize Theron, for her portrayal of disturbed serial killer Aileen Wuornos. Where’s the connective tissue between a 2003 film and a biker bar that might just be radioactive? The Last Resort is where Wuornos picked up her last beer.

She’s a controversial figure, given her background and some of the claims she made during her trial. Wournos died on the table, connected to a fatal IV, still proclaiming her innocence. She never once shrugged shooting her Johns at point-blank-range… nope she was in fact rather proud of her marksmanship… but that her motive had been self-defense; for all seven men. Wuornos sustained that her victims had either raped or attempted to rape her while she was in their service. She hung her trial whole defense strategy on the fact that all the homicides were justifiable. Her trial was a sham. The prosecution well prepared. Her story and alibi riddled with holes. Her defense team consisting of a legal eagle called “Dr.Legal”. To say that the pig circus was laughable would be underselling it. She was convicted for 6 of the 7 men’s death.

Aileen was in a way a tragic figure. One of those persons that from day one never caught a break. She was ruthless, she was friendly, she was manipulative, she was charming; she was the poster-child for anti-social behavior with psychopathic tendencies. If Aileen had ever gone online and done one of those quizzes – I’m I a Psychopath? – that are so popular, the FBI’s digital spider bots would have instantly alarmed the nearest Behavioral Unit.

Wuornos’ story is as morbid as her crimes. She was repeatedly raped and abused growing up in Michigan. Her father committed suicide in prison and her mother abandoned her. She began selling her body at an early age and most of her classmates treaded her like the plague. Her grandparents, later on, threw her out at age 15 and she hitchhiked out of Michigan – a harrowing trip full of predators – and eventually ended up in Florida. She called Port Orange her home. Uneducated, with few prospects, and even fewer ambitions, she survived once more selling sex on the highways. She claimed she killed her first victim in self-defense after he raped her.

“I think this anger developed inside her. And she was working as a prostitute. I think she had a lot of awful encounters on the roads. And I think this anger just spilled out from inside her. And finally exploded. Into incredible violence. That was her way of surviving. I think Aileen really believed that she had killed in self-defense. I think someone who’s deeply psychotic can’t really tell the difference between something that is life-threatening and something that is a minor disagreement, that you could say something that she didn’t agree with. She would get into a screaming black temper about it. And I think that’s what had caused these things to happen. And at the same time, when she wasn’t in those extreme moods, there was an incredible humanity to her.”

On her day of execution, Wournos last words circled the globe, and just like the film that was months from premiering, they elevated her status to mythic proportions.

In 2003, Monster become an indy hit and more importantly a festival darling. Theron had nailed Aileen and the Last Resort was on every fan’s lips. The movie chronicles Wuornos’ life until her first murder conviction. From her abusive childhood, through her teens and multiple episodes of being sexually assaulted, all the way to her trial.

Wuornos was executed in 2002 and her body was cremated, her ashes were spread underneath a tree in her childhood home of Michigan by her friend, Dawn Botkins. One of her last requests was that the Natalie Merchant’s song “Carnival” be played at her burial.

“When director Nick Broomfield sent a working edit of the film, I was so disturbed by the subject matter that I couldn’t even watch it. Aileen Wuornos led a tortured, torturing life that is beyond my worst nightmares. It wasn’t until I was told that Aileen spent many hours listening to my album Tigerlily while on death row and requested “Carnival” be played at her funeral that I gave permission for the use of the song. It’s very odd to think of the places my music can go once it leaves my hands. If it gave her some solace, I have to be grateful.”

On January 9, 1991, cops arrested Aileen Wuornos in the Last Resort. The woman sipping a cold beer, most likely her last, on the counter. She was taken in for an outstanding warrant. Since then, in what is normal Florida behavior but anywhere would cause double flip induced whiplash, the manager of the Port Orange has promoted the killer’s fame. The abode has in essence underscored the joint’s connection to Aileen… with roman candles and fireworks.

A framed photo of serial killer Aileen Wuornos sits on the bar. Her picture pasted on bottles of hot sauce – “Crazed Killer Hot Sauce”— with a warning label: “WARNING!! This Hot Sauce could drive you insane, or at least off on some murderous rampage. Aileen liked it and look what it did to her.”

Wournos’ face is plastered on every wall… and you can even get a T-shirt with her mug shot. On the far wall, an airbrushed portrait of her cracked face and a list of the seven men she killed, along with her last words. Tacky doesn’t even begin to describe it.

At a nearby motel, guests often ask for the room where Wuornos stayed. Some not only staying the night but paying extra for the room. “Couple came in and just took dozens of photos of the bathroom. Just the bathroom. Turns out they have a website devoted to serial killers and their bathrooms.”

“She wanted to be remembered and keep the memory going. Well, we’ll keep it going for her.”

The bar is covered inside and out with graffiti. Charlize signed a brick during the filming of Monster and it’s still one of the joint’s most priced possessions. The Last Resort is not the kind of place any normal person would frequent but this isn’t an article for normal humans, now is it? Old-timers and patrons still talk and are happy to share tales on Aileen.

“I’ve been asked some of the stupidest questions, did she act like a serial killer?’ Well hell, I don’t know. I’ve never seen one. I don’t know what they act like. And one guy asked me, ‘Well, were you scared of her?’ I ain’t never been scared of nobody. When they first come in she goes ‘My name is Lee and this is my girlfriend Ty and we’re gay.’ And I’m, ‘Well my name’s Cannonball and I don’t care. Pay for what you get, don’t cause me no grief and I’ll treat you square. I don’t care what anybody is.”‘

Even before Aileen, The Last Resort was an incredibly popular biker bar due to its connection with Hank Williams Jr. The country icon mentions the pub in the song “Daytona Nights.” And it’s not just the bar that’s wacky but the area around it. There are open caskets with plastic skeletons, toilets thrown around the patio, jukeboxes cleaved like tombstones in the lawn. The piece of resistance? A live oak tree with battered motorcycles- “it’s our Japanese garden” – hanging from its limbs.

The final piece of looney Floridian lore: regular patrons love to have their ashes scattered outside.

The bar’s slogan is “Home of ice-cold beer and killer women.”