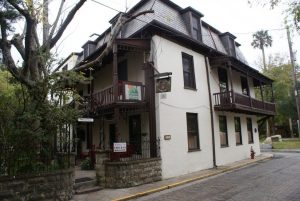 A harrowing tale of star-crossed lovers calls St. Francis Inn its backdrop. A sad and telenovela worthy story of a love affair gone astray. Of a couple of Romeos and Juliets gone astray.

The scene that played out in that passion play and used the St. Francis Inn as a locale is truculent, steamy, and full of backstabbing deceit, sinful blackguards, guilt-ridden escapes and even ghost. It is a story worthy of the Bard and one that has become legendary in St. Augustine.

The History of St. Francis Inn.

Built-in 1791, St. Francis has the distinction of being St. Augustine’s “oldest inn.” The house itself represents the vibrant history of the nation’s oldest city. it is a building full of colorful tales and noteworthy stories.

The Inn reflects the worries of the Spanish Colonial period and what troubled the citizens back then. The Spaniards were constantly on a war footing, the lot being haggard by the English and French and pirates. By decree, all houses were constructed so they might  “serve as a defense or fortress against those who might attempt to occupy the town.”

As such the whole property has a mystique about it.

Dummett lived a rather colorful life. Stories abound about his exploits and how he became one of St. Augustine’s most notable figures. Dummet was a sugar baron from Barbados. He retired after the British subjugated that nation and most of the West Indies from the Royal Marines and became a scourge on slaves and hired hands. He built an empire on the back of slave laborers and had one of the most well-to-do sugar plantations on that island.

Up until 1819, Dummett was making a killing. Shipping his white gold all around Europe and hiding coffers of gold bullions all over. Then, 1817 hit Barbados and the English banned slave trading… But, before that actually happened, a slave uprising seized the tiny island and Dummett had to get the hell out of dodge.

There are contradictory stories, some say Dummett had to get out of Barbados because the salves wanted his head, others state that the British uncovered a mass grave and that Dummett was wanted for crimes against the state. The one thing they can be certain is that Dummett smuggled himself aboard a ship, hiding in ana empty sugar barrel, with most of his small fortune already bound for America.

Dummett and his family moved to New Haven Connecticut until 1825.

In 1825, Dummett bought several hundred acres along the Tomoka River south of St. Augustine and built himself a sugar mill plantation. Now, aside from sugar, he was also going to distill Rum. Dummett back to his old slave-trading ways and started to import slaves from all over the Caribbean. Like all well to do families back then, Dummett ended up buying a spot in St. Augustine. That spot? The building that would one day become the St.Francis Inn.

Carrying on the military customs, Colonel Dummett’s daughter Elizabeth wedded William Joseph Hardee when he was hospitalized while stricken with a disease during the Seminole Wars (1835-42).

And here’s were the tragic tale comes in and the ghosts make their merry entrance.

The Hauntings At St. Francis Inn.

None of Dummett’s children nor their spouses were particularly friendly to their “colored” helpers. The Dummett clan had built their rich fortune off black servants and treated them as livestock.

Anyway, during William Hardee’s time as manager and part-time owner of the Inn, that racial hatred took a turn for the worse. In the middle of the 19th century, Major William invited his nephew to come and live with him and Elizabeth in the Inn.

The young kid, wild oats and all, began working around the house and after a month or two fell in love with a young beautiful slave girl from Barbados named Lily. The feeling, it seemed, was mutual. The two sneaked off every chance they could and carried out a steamy liaison under the backwood’s gaze of the Major and his wife.

One day, the boy’s uncle, Major William Hardee, wandered in on the lovers and had a fit. He dismissed his nephew and chose to take out his wrath on the small servant girl. The girl was savagely beaten. Lily passed away from the open wounds 3 days later. His nephew, guilt-ridden, leaped out a third-story window severing his neck as he crashed through the glass.

Since that moment the place has been a hotbed of supernatural activity.

People how have stayed in the Inn have reported all manner of ghostly hijinks by Lily and her lover.

Here are a few:

A number of Paranormal Investigators have come to the Inn.

“Approximately 2:15 am a tall, slender Hispanic male, dark, wiry hair pulled back into a short ponytail, dressed in a white silk shirt and dark trousers, appeared on the left side of the room. He paced back and forth in the space between the bed and the dressing table from the window to the open door leading to the sitting room. He exited the door leading into the sitting room. An older male, dressed in brown, with a brown tri-cornered hat, appeared from the left side of the room, walked on through to the sitting room. Neither seemed to be aware of the two people in the bed.”

They’ve reported other ghosts, not only Lily and her lover, and a number of multiple lights and other atmospheric phenomena.