The Ghost of St Augustine The Huguenot Cemetery 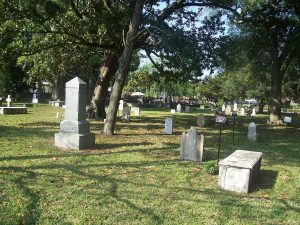 The Ghost of St Augustine, The Huguenot Cemetery

Let’s take a stroll through time and pinpoint what ghosts, phantoms, and specters frequent the Huguenot Cemetery, one of St. Augustine’s most haunted places. Another of the places visited by St. Augustine’s ghost tours.

St. Augustine radiates a supernatural quality. You can actually feel it the very second the sun goes down and the moon paints the street. There’s something otherworldly and, to put it mildly, spooky as… well… you get the expletive that was coming.

And why is that? Well, let’s put aside the whole turgid mess that St. Augustine is the oldest continuous settlement in the United States – that alone should grant it some say in the whole ghostly powerplay – and focus on some of the highpoints of its existence.

Since antiquity and all the way to modernity, St. Augustine has been embroiled in all manner of skulduggery. Bloody events pop out of its history like rabbits on meth after a Spring shower. Tribes of natives playing Game Of Thrones and butchering each other. Colonial periods rife with genocide, war, pirate raids, famine, and plagues. A region passed from one Imperialistic dictator to the other every couple of years. And, when modernity finally made its triumphant entrance, St. Augustine devolved into a haven for smugglers, rum-runners, carpet-baggers, and corrupt officials.

Check out all the landmarks and antique hotels littering the streets and their unsavory history. Each and everyone has a truculent and hair raising tale. A county jail that was nothing more than a concentration camp. A posh hotel for the filthy rich and their maniac wives and harem of mistresses. A fort with so many decadent tales of cruelty that you’d need a whole book just to cover a smidgen. A hotel owned by slave traders. Another hotel owned by a rum-runner. A clinic built over a mass grave. A warehouse once occupied by Satanists. A bay where hundreds of throats were literary cut is now actually called “Matanza” (Slaughter)…

The place is so wacky that in 1896, what could only be described as the son of Cthulhu, washed ashore.

All those deaths, all those brigands, blackguards, and their victims, for a while, ended up in Huguenot Cemetery… Is it any wonder that the place is haunted?

The History of the Huguenot Cemetery.

The Huguenot Cemetery, located across from the historic City Gate, was a Protestant burial ground between the years 1821 and 1884.

In 1819, the Spanish colonial settlement of St. Augustine – after years of staving off the British – ended up handing the reigns of the city to the recently established US Empire. In 1819, Spain was in a pickle. The Americans had just boot-kicked the red coats out off the continent and now that same diplomatic fervor was eyeing them with less than warm intentions. Tensions were high and territorial boundaries were being tested. Also, adding hurt to injury, The Spaniards count no longer afford to send settlers or garrisons to some of their occupied territories.

A deal was hashed and John Addams bought a huge swath of land at 5 million bucks. The Transcontinental Treaty or the Adams-Onis Treaty now placed Florida, and St. Augustine firmly in the hands of the yanks.

In 1821, after some back and forth and a grace period for Spanish troops to vacate, Americans took actual physical occupation of the city of St. Augustine and the new State of Florida.

The Cemetery was Built

Up until then, the city was predominately Catholic and the only burial spot inside the city, the Tolomato Cemetery, was reserved for that denomination. The new American government realized the demand for a Protestant burial ground a field just outside the city gate. The first burials took place in 1821. Then, the place ballooned overnight when a  yellow fever epidemic claimed the souls of a large number of the city’s residents.

The cemetery holds at least 436 burials. The cemetery, although named “Huguenot Cemetery” isn’t believed to contain any members of the Huguenots, a French Protestant sect, that started in 16th century in France… and was pivotal to St. Augustine’s history… until they were slaughter by the Spaniards (but that’s a whole other story).

The Hauntings At the Huguenot Cemetery.

The Place is colloquially called “Spirit Central”. That portmanteau alone should be a signal as to what you might encounter. St. Augustine is the home of dozens upon dozens of old cemetery, but only one – the Huguenot – is actually believed to be haunted. It is one of the many places where you will find The Ghost of St Augustine.

Visitors are likely to encounter, aside from gravestones that date back nearly two centuries, a bizarre sense of foreboding, of dread and, as one person described it, “as if all the happiness in the world had been snuffed out of existence.”

When the Yellow Fever took a bat to St. Augustine’s citizens, one of those afflicted by the disease was a 14-year-old girl. Her body was dumped like trash during the height of Fever hysteria at the Old City Gates. No ID, no one to claim her, just one more corpse the city had to deal with. She was placed in paupers’ tomb inside the cemetery without any rites and no one to cry by her grave.

Since then, many people have claimed to see her ghost floating among the trees, particularly between midnight and 2 a.m.

Another tale, tall or short, revolves around Judge John Stickney. In 1882, death took a hold of the Judge. He flew into a grave that very year. Years later, his children now living in Washington D.C, decided to exhume him and transfer his remains near where they now resided.

The gravediggers dug him up and midway to the proceeding decided to take a small break. The gravediggers discovered the casket wide open. Thieves had violated it and stolen the Judge’s gold teeth stolen.

“Should we inform someone?”

“You nuts? They’ll have our hide. Just close the casket and none shall be the wiser.”

Since that single act of thievery, gold is gold, the Judge’s ghost has been said to haunt the rows and aisle of the cemetery on a nightly basis. The judicial juggernaut no doubts hunting with hauntings the malcontents who absconded with his dental diamonds.

On the day of the exhumation, the gravediggers took a short break to refresh themselves from the grueling Florida heat. In their haste to take a break, they left the casket open, only to return to find that thieves had stolen the Judge’s gold teeth. Nonetheless, to protect their jobs, the two workers simply closed up the casket in the hopes that no one would notice the missing teeth. But someone did: the judge himself. The Judge haunts the place because of this act of thievery.

The orbs and other strange going ons.

The place has been a known hotbed for orbs, lights, and strange auditory illusions. Visitors constantly claim that they have heard a cackling of a man doing his best Joker impression. They also swear that they have felt something tracking them among the bushes, following them around. The only alarm the visitors that they are being stalked is the crack of dead leaves.