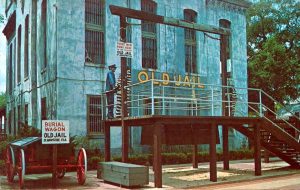 Jail houses should come with a clause in their contract. A legal obligation between the builder and the committee that commissioned them. A binding, no BS, you either fulfill the iron clad add-on or join the ranks of the dammed inside stipulation that reads:

”Once completed, it is mandatory to enlist, at least, one supernatural terror per year of function.”

Then, like Subway, once you peg an allotted number of specters, you get a free demon or banshee. Think meatball sub but instead of calories clogging up your arteries, nightmares are the dead give away.

The ever trustworthy, and staying true to the spirit and letter of the law and its binding legal minutia, the St. Augustine’s old-time jail – the equivalent of a jail crafted in the PTSD night terrors of that guy from Deliverance that goes gonzo whenever he hears a banjo – met that quota of phantoms and went overboard.

The History Of The St. Augustine Old Jail Museum.

The story of St. Augustine is rather simple. It starts with millionaire industrialist Henry Flagler looking at prime real-estate, getting his heart set on a spot for his magnificent new Ponce de León Hotel, and asking his hangers-on:

“What the hell is that on top? On top of where? Where I’m envisioning my hotel, that’s where. A county jail? Nope, that won’t do… tear it down.”

And with that, and the knowledge that money makes the world go round, Flagler offered the county a cushy deal. A new $10.000 dollar jail, designed by the same lads that built San Francisco’s Alcatraz, with one and one very important caveat.

“Guys… Trust in papa Henry… I’ll make the place look cozy and cute. The outside is meant to hide all your jailhouse shenanigans. Remember this is going to be a tourist town… Who needs an eye-sore?”

Flagler deliberately devised the new jail to seem friendly from the outside so as not to turn off guests visiting his elegant nearby hotel. This was one of the first stops on Flagler’s Florida, he simply couldn’t have the riff-raff muddling his vision.

The Old Jail served as the St Johns County Jail until 1953. Through all those years the place was a madhouse of depravity and cruelty. Most prisoners debasing themselves to common animals while the staff running the joint slowly went insane and did all manner of sketchy things.

The original building – before it was sold to entrepreneur Henry “Slim” McDaniel who began operating the roadside tourist attraction – house up to 72 prisoners. It consisted of a two-story north wing for the general population, a maximum-security area, a women’s section, and a lower level kitchen. The maximum-security section was the equivalent of Arkham asylum; the place housing the Jokers and Riddlers of Florida and even having a Death Row cell for those hooligans condemned to die. 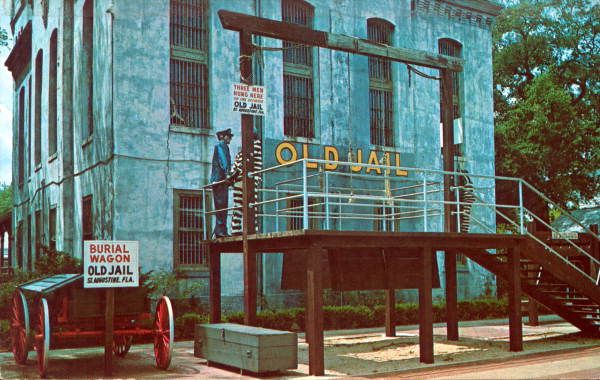 Yup, this place was the Green Mile minus happy-go-lucky Tom Hanks… filled to the rafter with Sam Rockwells, and instead of Old Sparky, a very trustworthy gallows. A total of 8 men were hung from the gallows found on the compound during the prison’s controversial history.

Now, here’s the kicker, outside, the jail looked great! It was a very quaint and folkloric building, tourists would flock to its facade and take photos with its cute exterior.

“Let’s get a selfie! Don’t be a spoilsport, just ignore the screams and cries… Out of sight out of mind. Florida, baby!”

Inside it was a deplorable mess that really talked volumes on what Flagler really value. The industrialist didn’t spare a dime on the exterior while going out of his way to cut corners were the prisoners’ were concerned.

The conditions were incredibly poor and dreadful. Prisoners were typically used as free farm laborers and forced to slug it out as indentured servants in the Florida heat for plantation owners. The guards and the warden lining their pockets with the money that was supposed to go to building maintenance and their charges.

Meanwhile, after a day of backbreaking toil, the condemned were marched back into the jailhouse and basically crammed into small cells. Baths were a pipe-dream, toilets were nothing more than a shared bucket that was passed from cell to cell when the need arose, and beds were slabs of termite infested wood that served as a collective cot.

The prisoners had to supplement their diets with whatever they managed to catch either inside their cells or while working in the fields. Segregation by race was steadfastly adhered to at the Jail and illness, brutality and death were common.

“People were rounded up on trumped-up charges like loitering and intoxication, and in those days, when you were rounded up, it was pretty much a death sentence.”

The place was hell. Over 72 male prisoners and 12 females fought for survival. Everyone was required to work till’ their bones ached and human rights and all that claptrap was a pie in the sky belief. On any given day prisoners would brutalize one another, guards would vent their frustration out on flesh, and females would be raped and peddled out as sex workers.

“There are all types of horror stories concerning the 12 females that once called this place their home. Their responsibilities, on paper, were to cook and clean for the male prisoners and the sheriff’s family – prison maids – but as conditions deteriorated and our worse angels started whispering in fevered minds, things started to take a very dark turn.”

The county would drag women of low character and reputation into the jail. They’d pull off a pig circus of a trial and sentence the lady to a hard time. If you didn’t have a family, were poor, were lacking a husband, had some sort of mental disorder, or were pretty on the eyes and had no-one to defend you, the cops would round you up and throw you into the system.

Meanwhile, men were lent out as slaves; traveling the country in tiny cages and shackled together by their ankles. They weren’t working with the proper equipment and sometimes didn’t even have shoes. They returned to the building with open wounds.

Inmates only lasted about two years before dying from infection, violence, illness, malnutrition or hanging. The only time a doctor ever visited the place was on hanging days. Cholera, tuberculosis and hundreds of other diseases ran rampant throughout the jailhouse. The death rate was staggering and, after some blowback, the numbers were fixed by the county.

“When the press got hold of it they put up a stink. Did the county respond? Yup, they started fixing the numbers. Prisoners would ‘disappear’ while out on loan and the staff would simply classify them as escapes. Another tactic they used was the following, right before a prisoner would succumb they would either ship them off to another jail or they would grant the inmate a pardon… their inevitable death no longer tarnishing the county’s rates.”

Hangings were a real feast for the populace. Everyone treated them as shows and eventually it became such a problem, crowds becoming unruly during the procedure, that the county was forced to give out unreliable timeframes for them. They started announcing fake hanging events.

With that historical baggage is it any wonder why the place is haunted? 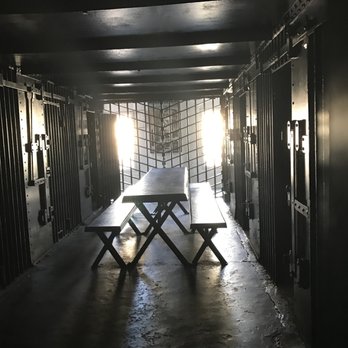 Let’s talk about what people experience.

But, the cherry on top is the fact that ghost hunters and paranormal investigators claim that there is a spot in the old jail that can make a Mulder out of a Skully. A place that has made skeptics believe in the paranormal.

The solitary cell. Folks are challenged to stay in the cell and sit alone in the far left corner. Everyone has claimed to have seen a shadowy figure lurk towards them. A sort of shade that scurries and tries to tear at them. Everyone who has taken the test has attested to the experience and the few that somehow left disappointed later claimed to have uncovered scratch marks on their belly the very next day.

“Some people claim that it might be the remnant of either Sim Jackson – who was hanged in 1908 after murdering his wife with a straight razor in 1906 – or Charlie Powell – who was arrested for beheading a man for spreading rumors about his spouse. Others claim it is something far more vile and sinister… a collective residue and leftover of all the cruelty… a concentrated mass of pure evil… distilled hatred, savagery, lust. They say they can feel a hunger emanate from it, a pressure building up, something rotten just before the shadow burst out at them… one TripAdvisor comment actually stated: ‘like it was trying to consume me’.”