Okiku, The Japanese Haunted Doll that puts Chucky to shame 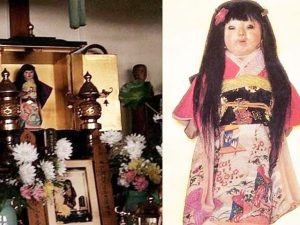 The haunted doll phenomenon isn’t just craze reserved for superstitious Yanks and Chucky lovers. It’s not just an American genre. Yes, as a whole we might have the most famous examples out there, but that just speaks volumes of our branding and marketing skills, not our ability to cross-swords with the Devil and come out on top. Robert, Annabelle, Chucky, the holy trinity of the possessed, are ours. Those icons were breed and branded in the good-old US… BUT…those icons and poster-children of the cursed sensation are goofy looking compared to some of the fanfare and examples out there in the world at large past the Happy Meal induced borders. If you want absolute terror, if you want cringe-worthy horror, if you want the sort of fright that might make the likes of Thor ask for his mother, then your best bet is to hop on a plane and travel to the exotic Orient; to be exact Japan. The Nation of the Rising Sun basically goes: “hold my beer,” whenever we cocky American’s think he has the market cornered in anything relating to the supernatural. “Look, we have Jason Voorhees! Big deal, that’s just a TV and an old VHS… Press play? Sure, why not?… ARGGG” We might have Chucky, we might have Robert… But Japan has more creepy crawlers of their nature and kind than in a Hollywood pitch-meeting post-Annabelle box office triumph. Japan has Okiku the haunted doll and she’s just the tip of a very dark iceberg.

In 1918, a young man purchased the doll that would later-on claim the name of Okiku as her own for his two-year-old sister, and the legend would kick-start a tourism flash.

Japan during this era was still stuck in the ways of feudalism. While the world around her was embracing the progress of technology and science, Japan was holding tight to her belives and to her rich mythology and fables. This was a land and still is by all accounts, where demons, ghosts, vampires, and other creatures roamed free. A land were goblins and evil spirits were constantly harassing normal folks. On February 3rd, you drove evil spirits away by going to shrines and through rituals and folklore practices, Setsubun events. Lake monsters gobbled kids up. Woods, like Aokigahara, Northwest of Mount Fuji, drove people insane and compelled them to suicide. Foxes were sacred and devoted animals.

Japanese culture was and still is fraught with legends and the supernatural boogeymen… And dolls, some of them, were powerful instruments of magic. You didn’t mess with dolls.

The doll was bought in Sapporo by a 17-year-old Eikichi Suzuki in 1918, for his 2-year-old sister Okiku. He was touring the region for a maritime exhibition, and the doll instantly drew his eyes. The perfect little thing sat on a shop window enticing him. Suzuki didn’t think twice, he went in and instantly purchased the figurine for his sister; used the last of his money for it.

At about 40cms tall and dressed in a traditional kimono, the doll was exquisite. Its hair was raven black and cut to roughly shoulder-length, in a traditional ‘okappa’ hairstyle. Her eyes were piercing coals that seem to swallow everything up in their gaze. The thing was mesmerizing and enchanting, something to take your breath away.

Suzuki went back home and gave the doll to his little sister. The tyke fell in love with the doll immediately. It transformed into Okiku’s favorite toy and, more importantly, her best friend. Okiku played every day with the doll, took it everywhere, and treated the figurine like a little sister. She would talk, and prattle with the thing. Feed it. Sleep with it. She decided to call the doll ‘Okiku’; a mirror duplicate of herself. The doll never left Okiku’s sight.

Then, a year later, tragedy struck. In 1919, Okiku died. Yellow Fever had descended on the land and rubbed the family of the little girl. Okiku died gasping for air, in pain and afraid… the doll held firmly in her grasp. She was only three years old. The family wanted to bury the doll along with Okiku, but circumstances and governmental oversight prevented this last act of kindness on their part. The doll was never laid to rest with Okiku.

Okiku (the doll) was alternatively located in the family’s altar – a common practice in certain Japanse households to commemorate the dead. The small shrine celebrated their daughter and marked her passing into the afterlife.

That’s when the weirdness started to occur.

One day, the family started to notice that the doll’s hair was getting longer. Once a traditional shoulder-length cut with neat ends, now a mangled mess of split-ends reaching down past her waist. It was scruffy, different colors, and felt different.

At night, they started to dream of Okiku, and sometimes the doll would appear by their side come morning. The chillings events intensified and grew into full-blown acts of spiritual infestation – lights flicking on and off, bangings in the house, noises, and strange voices – the closer the year got to certain key dates; Okiku’s birthday and the day of her death.

Over time, they were certain and town shamans/spiritual leaders concurred that their daughter’s soul was in fact trapped within the doll.

In 1938, the family relocated to a different district. They had by now become accustomed to Okiku and had even grown fond of their daughter’s restless spirit; to them, it was a magical and a unique opportunity to interact with the dead. Not desiring to take Okiku with them – fearing that what fueled her magic was the proximity to their daughter’s grave – the family approached the local temple and asked them to take care of the doll.

The Temple by now had heard countless stories of the amazing doll – the haunted doll whose hair grew every year. They were fascinated – skipping like schoolgirls – with the prospect. The priests gleefully accepted the charge and started taking care of Okiku. Over time, they’ve managed to confirm the veracity of some of the claims… particularly that the hair does indeed grow.

The priests have sent out cut samples of the hair for scientific analysis… scientific examination of Okiku proved that the hair was that of a human child.

Regularly the hair gets a trim and the doll stays happy and content.

As the years passed on, the doll’s fame grew and her powers further developed. She’s bolder now, invading the dreams of the priest and those that come to visit her. She’s stronger, her hair growing faster and wilder. And, she’s even spookier. The lasted event driving tourists mad is the frightening claim is that the mouth of Okiku is slowly opening and that if you dare to peer inside you may be able to glimpse something like baby teeth spouting like weeds from porcelain gums.

Okiku is located in her private shrine, on display in a little wooden box, in the Mannen-ji Temple in the town of Iwamizawa, Hokkaido, Japan. She’s there, waiting for all who want to play with fire and have a one on one conversation with the paranormal and the bizarre.