From The Black Plague to Coronavirus: 7 Pandemic Hauntings In The US.

HOME » BLOG » HAUNTED PLACES » FROM THE BLACK PLAGUE TO CORONAVIRUS: 7 PANDEMIC HAUNTINGS IN THE US.
Posted by blogger in Old City Ghosts 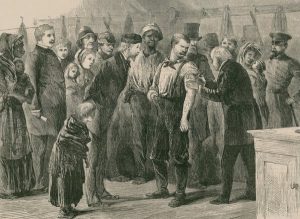 As human civilization proliferated, evolved and spanned across the globe so did infectious diseases. As humans got together and borders broke, as we strived to make a truly unified world – sharing our space, our ideas and the very fires that would eventually galvanize the future – we also paved the way for viruses to hitch a ride into our dreams. Outbreaks and pandemics like Spanish Flu, Coronavirus COVID-19, Ebola, Swine and Bird Flu and thousands more. Each leaving their ghosts… their Pandemic Hauntings.

When settlers came to the Americas, what ended up wiping the natives wasn’t the might of the Conquistadors or the forces of Colonization, it was the unseen; smallpox, infections, and other minuscule nasty critters that were carried along on the transatlantic trip. Trading routes like the Silk Road spread the Black Plague, commerce with oversea breeding grounds between West and East jumpstarted Ebola’s Earthly walkabout… in short, one region of the globe may be immune to a bug while the rest isn’t.

This is the double edge sword of progress. The more we mingle, the more we rub shoulders, smack lips and basically frolic around in exotic soil, the more likely we’re going to catch something… But, if we don’t boogie down, do the Macarena and cut a rug with our outlandish neighbors we won’t evolve. Not only biologically, Native Americans became immune to dozens of diseases when Conquistadors were ensnared by their chocolate eyes and Latin charm and breeding began, but technologically. If we, as a civilization, didn’t commingle then we wouldn’t half the tech’ wonders that are ubiquitous in modernity… No iPhone, No Netflix, No planes, trains and automobiles, and No radical treatments of vaccines for what ails us.

The Top 7 Pandemic Hauntings in the US…

Where we kicked some infection’s teeth in. 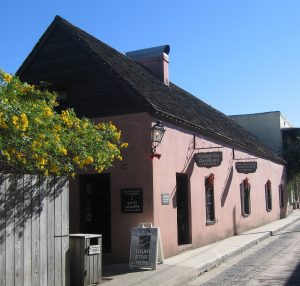 We’ve had so many viruses that as far as pandemic hauntings are concerned each state is riddled with one or ten. In St. Augustine one of those ghostly hotspots is the Spanish Military Hospital. This place has battled smallpox, influenza, Spanish Flu, Yellow Fever and thousands of soldiers scratching their private parts and going: “what do you mean going to a brothel is dangerous? Crabs? But doc’, I ain’t gone fishing.”

The Spanish Military Hospital is rife with all manner of supernatural activity: doors slamming, unearthly wails, cold spots, puddles of blood blossoming on the floorboards.

Folks have witnessed all manner of supernatural activity, even feeling what they describe as “an evil all-consuming force” that seems to shroud the historic building in a funeral veil.

The Dry Tortugas National Park – a series of Caribbean keys – is one of the most visited spots in Florida. It’s idyllic, it’s heavenly, it’s bottled bliss…. It also houses one of the nation’s oldest and bloodiest prison.

Fort Jefferson, located on Garden Key, is where Dr. Samuel Mudd was imprisoned until he was granted a presidential pardon. Mudd was one of Booth’s collaborators and instrumental in the conspiracy to plug President Lincoln.

But, why exactly was a known Presidential Assassin given a get out of jail free card? Because the Doc’ was instrumental in saving dozens upon dozens of lives during a rather severe Yellow Fever outbreak in the Fort. He led a valiant effort against the disease. The place is now filled with those that didn’t make it, but, thanks to Mudd, the virus was beaten back and curb-stomped into oblivion.

New York is full of nutcases… Really, I’m not joshing you. Not just now but way back when the nation was still getting its feet wet and stumbling around in the dark. Don’t believe me? Just check out how many Asylums that state has considering how small it actually is.

Anyway, a rather interesting Pandemic Haunting can be found in upstate NY. It’s a reconverted farmhouse filled to the rafter with paranormal shenanigans.

The place started out as a joint for vagrants to squat and pass the night away while mixing bottles of turpentine to get a nice buzz. Afterward, the house was seized by the state and shaped into a hospital. During this time, New York suffered one of the greatest Tuberculosis outbreaks in history. The house, that later becomes an asylum, shipped in countless patients… most of them died and were buried in an unmarked grave just outside its doors. How many died? There aren’t any actual figures but the grey-beards of academia theorize that over 17k.

The place is littered with ghosts… And if that wasn’t enough, after the outbreak, the gothic mush pit of hell was refurbished into Arkham Asylum. Yup, why not? Let’s make the spooky house with the unmarked mass grave into a psych ward for the criminally insane… Is that a demon cackling?

Want to know more about this Asylum? Click here and get the scoop.

Here’s a quick history lesson of the building… Once I’m done I doubt you’ll wonder why it’s one of the most haunted places in South Carolina. First, it was a Tuberculosis Hospital, dozens died in its main room. Afterward, it was converted into an insane asylum. When the state shut it down due in part to criminal allegations being brought up against the sadistic staff, the place was converted into a halfway house for ex-cons recently released from prisons… Finally, the building burned down, mind you mysteriously and quite possibly because of arson.

Mostly known in the supernatural community as the place where the ghost of famous gangster, Thomas “Fatty” Walsh resides, the Biltmore’s history is full of spirits and specters.

After Fatty was gunned down and his lounge lizard of a phantom started haunting the 13th floor, the US went into a tailspin and entered World War II. During that time, the war effort converted most hotels in Miami into military hospitals and the Biltmore, given its size, was the big cheese of the re-appropriation bill.

After the war ended, the hotel was left in tatters. A such, each time an outbreak of something hit Miami, the city council would grab this old dame, gutted by years of neglect, and stack it to the ceiling with dying patients.

Get all the info on Biltmore’s Haunting by Clicking Here.

Established in 1875, this hospital was initially constructed to treat US marines and members of the coast guards. Over time, it started to branch out, partly due to a need to infuse capital in its dwindling budget and partly because some doctors have a God complex. How did it branch out? Well, it decided, no doubt spurred on by the den of mad scientist bored silly in its break room  – “have they invited Disney+ yet?” – to partake in medical research. What type of medical research? The Frankensteins began playing footsie with the Plague, Yellow Fever, and other diseases that could make Coronavirus their bitch.

There were rumors of outbreaks and Lovecraft type experiments being conducted in the place… and if the kaleidoscopic medley of spirits that haunt this joint is any indicator, those rumors had a couple of legs to stand on.

Read up on this creepy hospital right here.

That’s right, another Pandemic Haunting is the place they housed Capone. Each time a virus barges like the rampaging bull into humanity’s crystal shop, inmates all around the world get a funny look in their eyes and lose their heads. Why do they go bananas? Why do their testicles shrivel up and crawl back into their bodies? Because prisons are the world’s petri dish for just about anything that’s unsanitary. They know that when the feces hits that fan they are going to get splattered. Why are they so sure? Because their fans are already cluttered with the brown stuff.. with years worth of that protein shake.

Alcatraz was no different. If Yellow Fever hit the mainland, the prisoners started dropping off like flies. If there was a case of tuberculosis in San Francisco, Capone’s poker buddies were taking bets on who of them would bite the bullet first.

Alcatraz has seen all manner of pandemics and more than half the ghosts in the place would have lived for antibiotics… that’s gallows humor for you.

Get the inside scoop on Alcatraz’s hauntings here.

So, yes, we are at the mercy of viruses, and bacterias, and all those other infectious gremlins but those knaves don’t have the slightest clue what hornet’s nest they went kicked over (all vim and vigor here). This is a war, but at the end of the day, we’re the ones coming up on top and burying that a%&hole in a very deep grave. We’ll take a lot of casualties, but as a race, we will endure, meanwhile, Coronavirus and all its cabal of ner-do-wells will be swept into the dustbin of history; nothing more than a small bookmark in the epic lore that is humanity’s legend.

Yeah, I might be trapped in this cage with you… but that also means *cracking knuckles and giving off a toothy grin* that you’re trapped here with me, punk.