The Ghosts Of Flagler College 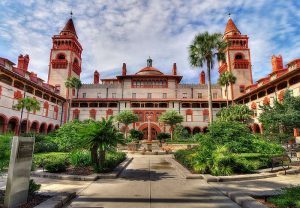 Way back in the bookend of the 19th century and the outset of the 20th Florida was the Wild West. The true final frontier of American ingenuity and expansion. It was a savage land of Indians, outlaws, corruption, man-eating lizards and apocalyptic hurricanes. It truly was the outskirts of the American dream and not even Washington with all its tin soldiers could tame that MOFU.

By the late 19th century, most Americans were looking at that big peninsula attached to the nation and thinking:

“Do you think there’s a lifetime guarantee on the Florida Purchase Treaty? Maybe call up the right Adams’ heirs and see if they can ask the Spaniards what there return policy.”

The only way to make a dent into that wild forest that was Florida was with an imaginative property more powerful than any tangible machete… Cold Hard Cash. You need to be a power-hungry Mongol with the steely-edge of the self-assured and elf entitled to think you could dominate and reign in nature.

Luckily, for millions of snowbirds, back in those days, American was brimming with these types of grade A personalities. Millionaires that could have given the Pharoehs a lesson or two on who to whip people and build pyramids.

The History Of Flagler University.

In 1882-83, Henry Flagler – the American Industrialist and Founder Of Standard Oil, the man who would later be known as the father of South Florida – decided to spend the winter months in St. Augustine. In 1879, Flagler’s wife Mary had fallen gravely ill, and the doctors advised Henry to take her to Florida.

“The sea, the air, and the weather will help.”

Mary died in 1881, but Flagler had by then fallen in love with the wild and unruly state.

Two years after Mary’s death, Flagler had already gotten hitch and was once more acting like the titan of industry that he was. Flagler arrives in St.Augustine and is blown away not only on account of its lush greenery and pristine beaches but on its untouched and intact historic architecture. For him, it was like slipping back in time and traveling back a hundred years. St.Agustine, thanks to the myriad hands and flags it had passed under, was an artistic enclave of different cultures and a true historical hodgepodge.

Flagler saw the potential for a winter resort for wealthy northerners and started scheming. Back in his home office, he started to build the blueprints for the Florida East Coast Railway. Flagler was going in big and had huge plans for the State and the money to back his play. He needed a sound transportation system to support his hotels and ventures. While he was doing this, he sent out an army of scouts to buy up real estate at pennies.

Smith, who was well-versed in concrete constructions was commissioned to start construction on Flagler’s base of command and flagship hotel. The place he would spearhead his expansion nd conquest of Florida. While Smith was grafting the hotel into the land, Flagler – who knew just about everyone – approached his persona friend Thomas Edison. Edison, who needed to prove the stability of his DC currency and gain the upper hand over Westinghouse’s AC alternative, saw an opportunity and supplied Flagler with a couple of DC dynamos. Edison oversaw the installation and the hotel was lauded as the first in the world to be wired for electricity and constructed with that technological resource in mind.

“It was sort of funny, because for a month after it opened up the hotel didn’t have any electricity. Not because the installation was faulty, but because local staff and even people staying in the hotel were too afraid to turn the switches on and off by themselves. Flagler had to hire men from Edison’s company to actually turn the power on and off… In each occupied individual room.”

In 1888 the Hotel opened to instant success and with 5 years Flagler’s had to build other hotels or acquire other buildings to accommodate quest. Flagler’s vision was coming true and he was on his way to creating an “American Riviera” in the viable and ripe for development Florida. 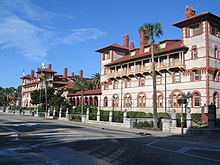 Over the next decade, the hotel saw such noted personalities as President Grover Cleveland, Mark Twain, President Theodore Roosevelt, Somerset Maugham, Babe Ruth, and Babe Didrikson.
Ironically, in 1910-1920 the hotel started to see a notable decline in visitors. Why? By then Flagler had expanded his railroad to West Palm Beach and Miami, and the affluent were flocking to hotels – also operated by Flagler – in these regions.

During World War II, the Ponce de Leon Hotel was taken over by the federal government and was used as a Coast Guard Training Center. St. Augustine is considered to be the birthplace of the Coast Guard Reserve.

In 1967, the hotel was permanently closed. A year later in reopened as the centerpiece to the newly established Flagler College.

The Hauntings Of Flagler College.

Now, a few things you should understand about tycoons back then… Have you seen the movie There Will Be Blood?

Daniel Day-Lewis’ character was partly based on these fat cats. On the Rockerfellers and Flagler’s. And those fat cats not only made Game of Thrones characters seem meek but when the partied they went all out.

Flagler’s Ponce De Leon Hotel was, for a time, a bustling place… not only inhabited by the 1% but by Flagler himself. And those fellas leave an impression of a wraith in their stead.

“When I was a freshman, I lived in the dorms. One night while I was sleeping, my roommate said that she saw someone standing at the foot of my bed all in black. I wore a lot of black clothes so she assumed it was me and tried to get my attention. She said that the figure didn’t move, didn’t react to her talking, she just kept looking at me. From that moment forward, until I moved out of the dorms, this lady all in black just stood in the corner across from my bed. She never bothered me or made anything happen, but she always stared at me when I was sleeping/falling asleep at night.”

Now a burgeoning campus and one of the most visited spots in St. Augustin, Flagler College thanks in part to its very turbulent past seems to be embroiled in all manner of supernatural escapes like the one mentioned above.

Here are some of the stories associated with the hotel.

“The only thing that scared me into shivers was a morning in November when I was showering and the door seemed to slam and suddenly, the light burned out. Now, everyone knew that you are probably most vulnerable in the shower. I was petrified! I jumped out of the shower, ran the 12 or so feet to the door and ran out in my towel! I quickly threw on a t-shirt and ran outside to the rotunda where all the lights were on and no one seemed frantic about a blackout. It never happened again, but it was enough for me. If you want a semi-active night, go sleep in room 300 in Ponce Hall.”