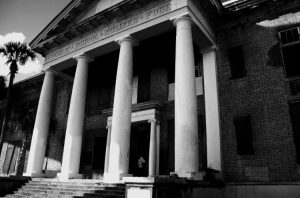 Annie Lytle Elementary School has seen better days. Actually, considering the urban myths surrounding the place, it probably never had any good days to begin with. While it was open, the school supposedly had a principal who was a cannibal, a janitor who would boil students alive in the basement, and even saw one of the faculty commit mass murder against the students. The school’s also seen quite a few fires, and the empty building might host weekly Satanic rituals. The school was first opened in 1891, and was operational until the 1960s, when it was forced to close due to the construction of a highway interchange. The highway cut the school off from the rest of the city, so it was shut down. The building was left to fall into disrepair, and eventually became known as the Devil’s School as the horror stories began circulating. The building has also become a haven for graffiti artists, and the colorful art has added a splash of beauty to compliment the dark and frightening interior. Today, the Devil’s School is known as one of the most haunted places in Jacksonville. The paranormal activity in the building is often attributed to what many call “psychic dust,” or the collective imprint of the energetic schoolchildren. Those who enter the Devil’s School will see faint apparitions and shadows of children laughing, playing, and sitting in the classrooms, as if looking back in time.

Before the Devil’s School

The Riverside Park School was built in 1891, and was a tiny, wooden schoolhouse with just a few rooms. As more people moved into the neighborhood, the school was expanded. Shortly after, the school was declared a fire hazard and shut down. This was in response to the Great Jacksonville Fire of 1901, which burned down a large portion of the city.

The building was rebuilt, but bigger and made of brick. It was the fourth public school building in Jacksonville and was originally called Public School Number 4. It was later renamed Annie Lytle Elementary School in honor of a beloved former teacher and principal. The school was built with four large pillars at its entrance, and featured a large auditorium and a fireplace in the center of the cafeteria. The classrooms were all on the second floor, and the cafeteria, offices, and auditorium were on the first.

The school stayed open until the 1960s. The expansion of the Interstate Highway System put a major interchange directly in front of the school, isolating it from the rest of the neighborhood. Not only did the classrooms become noisy from the sound of traffic, but the school became inaccessible. Annie Lytle Elementary was shut down. The building was then used as a storage facility for Duval County Public Schools up until 1971, after which it was left to rot and decay.

Annie Lytle Elementary became a hang-out for local teenagers looking for mischief. Graffiti artists flocked to the abandoned building to practice their skills. Rumors began swirling about what happened at the school and why it was shut down. In 1995, a fire in the auditorium caused part of the roof to cave in, adding to the urban folklore. Annie Lytle Elementary became the Devil’s School.

In 2000, Duval County designated Annie Lytle as a historic landmark. A barbed wire fence was erected to keep trespassers out, and volunteers have begun making improvements, like painting over the graffiti and replacing broken windows.

The Devil’s School: Murder and Mayhem

The urban legends and myths surrounding the Devil’s School became its main attraction. The most infamous story was that of the cannibal principal. Legend has it that the principal would call bad students up to his office for a “chat,” after which they would never return. Officially, the children were suspended or expelled, some students suspected that the students were being consumed by their evil headmaster. The principal had a closet which he converted into a meat locker, where the children were hung on spikes until he could eat them. According to some legends, multiple faculty members were in on the terror, and the principal was the ringleader. The story was never corroborated, but stories like these don’t come out of nowhere.

Apparently, the school’s janitor was evil too. Legends say that the janitor would kidnap unsuspecting students and bring them down to the boiler room and boil them alive. Because what else is a boiler room used for? After so many victims, one of the students escaped, causing some of the equipment to malfunction in the ensuing struggle, which led to an explosion. The resulting fire killed multiple students, and the school had to be temporarily shut down. When classes came back in session, the school was haunted by the ghosts of the dead children. Some of the teachers were so frightened that they quit, unable to cope with the tragedy. While the story of the boiler room torturer and the exploding furnace are often combined, many say they are two separate incidents, where the explosion was unrelated to the evil janitor. Others say the attempted escape caused the explosion. Unsurprisingly, this is very similar to a scene in Nightmare on Elm Street.

Another story is of another evil principal, but this time he outright murdered the students. According to the legends, the principal had been going mad from the stress of the job and was tired of constantly dealing with unruly children. One day he snapped and went completely berserk. He went on a rampage through the school, murdering the children via blunt force trauma, leaving trails of blood in his wake.

The most recent urban legend is that of the Satanic rituals that took place on school grounds. Some say the rituals began while the school was still open, having been started by members of the faculty, and continued to use the building for rituals after it was condemned. Others say the rituals began more recently, long after the school was shut down. Either way, the inside of the building is covered in graffiti, much of it Satanic in nature. Upside-down crosses and pentagrams can be seen all around the building. It’s rumored that the fire that burned down the auditorium was caused by the Satanists.

Are the Legends of the Devil’s School True?

It’s safe to say that the urban legends about the Devil’s School are mostly untrue, but every story has a grain of truth. It’s important to note the similarities and overarching themes in the stories about Annie Lytle Elementary. The first is the principal, involved in two of the legends. Perhaps the school did have a particularly mean spirited principal, one who doled out unusually harsh punishments. The second is the concept of children going missing. Both the cannibal principal and evil janitor stories are centered around children disappearing from school, only to be tortured and killed. The third is the possibility of multiple faculty members being involved. The legends of the satanic rituals and the cannibal principal both allude to the possibility of school staff being involved in the horrible events that may have actually taken place. Perhaps the real story is one of child abuse, where the principal and faculty routinely abused the students. Given the time period, it’s a possibility, as these sorts of things were hardly ever reported. The urban legends can be a manifestation of what actually happened, from the perspective of a child’s imagination.

Learn more about the haunted history of Saint Augustine!

Saint Augustine is the oldest city in America. That means plenty of ghosts! Check out the Castillo De San Marcos, the Spanish fort that put St. Augustine on the map. It’s full of the spirits of dead soldiers from past wars. Watch out for the St. Augustine Monster! No one knows where it came from, but surely there must be more hiding in the depths of the Atlantic. Don’t forget to drive by Spook Hill, where the optical illusion makes it seem like your car rolls uphill on its own. Is it aliens, or a portal to another dimension? Only one way to find out! You can also read about the top ten most haunted places in Saint Augustine right here!